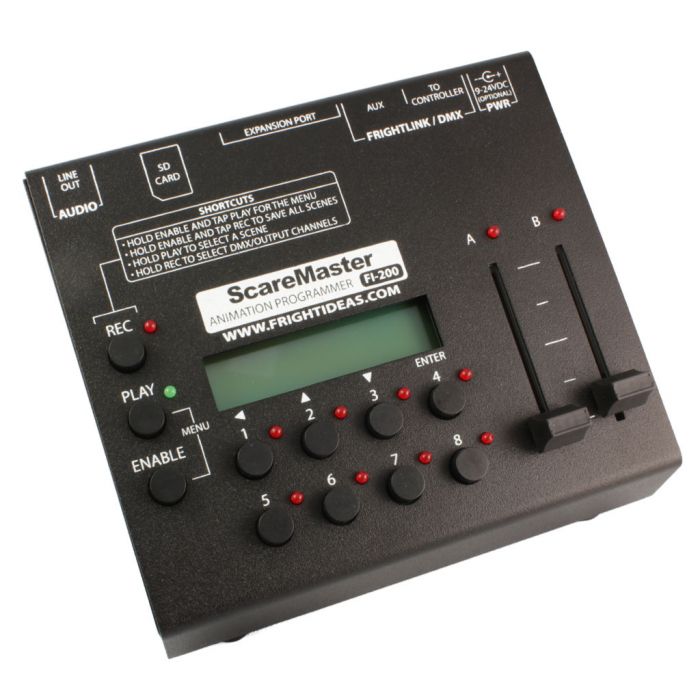 Skip to the beginning of the images gallery
Details
The ScareMaster programmer makes advanced scene programming easy. There’s no complicated software to learn or confusing button sequences to memorize. Just plug it into your BooBox and start animating. The ScareMaster’s FrightLink cable allows you to program from a comfortable location, rather than having to work from where the controller is mounted.

Just Act Out the Scene

Discover the true power of any of our controllers using the ScareMaster programmer. Even the most elaborate scenes can be easily programmed by simply pressing buttons and moving sliders in real-time.

The ScareMaster uses buttons to program the relay outputs and sliders to program the lighting and servo outputs. You can program as many or as little outputs at a time as you want, keep programming over an output until it's just right, all while listening to your sound track play along in perfect sync.

The ScareMaster is more than just a programmer, it’s a scare conductor. Leave it connected to any compatible controller, or even an army of BooBox 8+s and DMX devices, and control them all at the push of a button or flick of a lever. Great for scenes or shows that require manual control of certain devices.

The ScareMaster can be used to make perfect clones of any of our controller products, great for prop manufacturers! Once a prop’s sound and animation have been finalized, copy the sounds to an SD card and use the ScareMaster to make exact clones of each controller, both the sound and animation are copied perfectly every time. Any number of programs can be permanently stored on the SD card for instant and convenient cloning of any prop.

The ScareMaster’s LCD menu prompts you through each step of programming. The LCD also acts like a window into any connected controller, allowing it to display information and configuration options on the ScareMaster’s LCD screen as if it were it’s own. The intuitive interface makes changing even the most obscure setting clear and simple.

Firmware is like software, it’s the heart and soul of all of our products. The SD card option on the ScareMaster allows you to easily update it’s firmware to the latest version available free from our web site. Not only that, the ScareMaster has been designed to upload firmware updates directly into any of our controller products. From picoBoos to BooBox 8+s, or anything in between, the ScareMaster will keep them factory fresh.